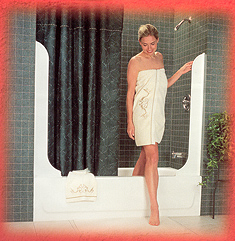 I can remember as a child my mother asking my younger brother and me, "Boys remember to wet the shower curtain and stick it to the wall. And when you're finished with your shower, mop up the floor!" Many years later, while living in an apartment that had carpet in the bathroom, I was having trouble with shower over-spray causing the carpet and walls to get wet and mildew. Not wanting to forfeit my security deposit due to water damage, I used plastic cove molding and attached a piece to the side walls to keep water inside the tub. When guests would come to visit they would inquire about the guard on my tub. After explaining my problem with shower over-spray, they would inevitably say they had the same problem and wanted me to make shower guards for them. 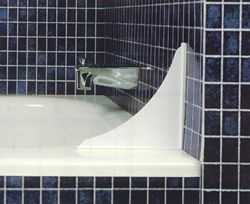 It’s been said, “necessity is the mother of invention" and this was the beginning of Spraymaid and mini-Spraymaid shower guards.

Spraymaid completes the shower curtain by providing the buffer needed to keep water inside the shower. For use on bathtubs and shower stalls…Where there’s a shower curtain, there needs to be SPRAYMAID!